Netball Injuries – What are the best ways to treat them?

What are the most typical netball injuries?

Netball injuries are more common than you might expect.

According to some sources, they happen about 14 times in every 1,000 hours played.

In other words, on average, you are likely to be injured once every 70 games.

That’s fine if it is a mild injury, but could really spoil your enjoyment if the injury is more severe.

Because it is such a multi-directional sport, a lot of the pressure is on the joints, especially the ankles and knees.

The fingers, hands and wrists are also very susceptible to injury. 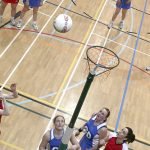